Your friends will hate you afterwards. When you come back from a cruise along the top corner of Western Australia on Kimberley Quest II, you will have so many separate things to rave about that they will start to avoid you. Quite honestly though, it’s a small price to pay.

My three-day sample was so crammed with spectacular sights and experiences that I actually can’t imagine how those who go on a regular cruise could handle all that sensory stimulation – though I am still envious. More cartoon-coloured scenery, more fishing, more waterfalls, islands, helicopters, Aboriginal art, crocodiles? Yes, please.

Beginning as spectacularly as it turned out we would go on, we flew in a seaplane from Broome, across baked orange land cut through by a ruler-straight road, to distant Talbot Bay. There we got our first view of what the locals casually call “the Horries”. 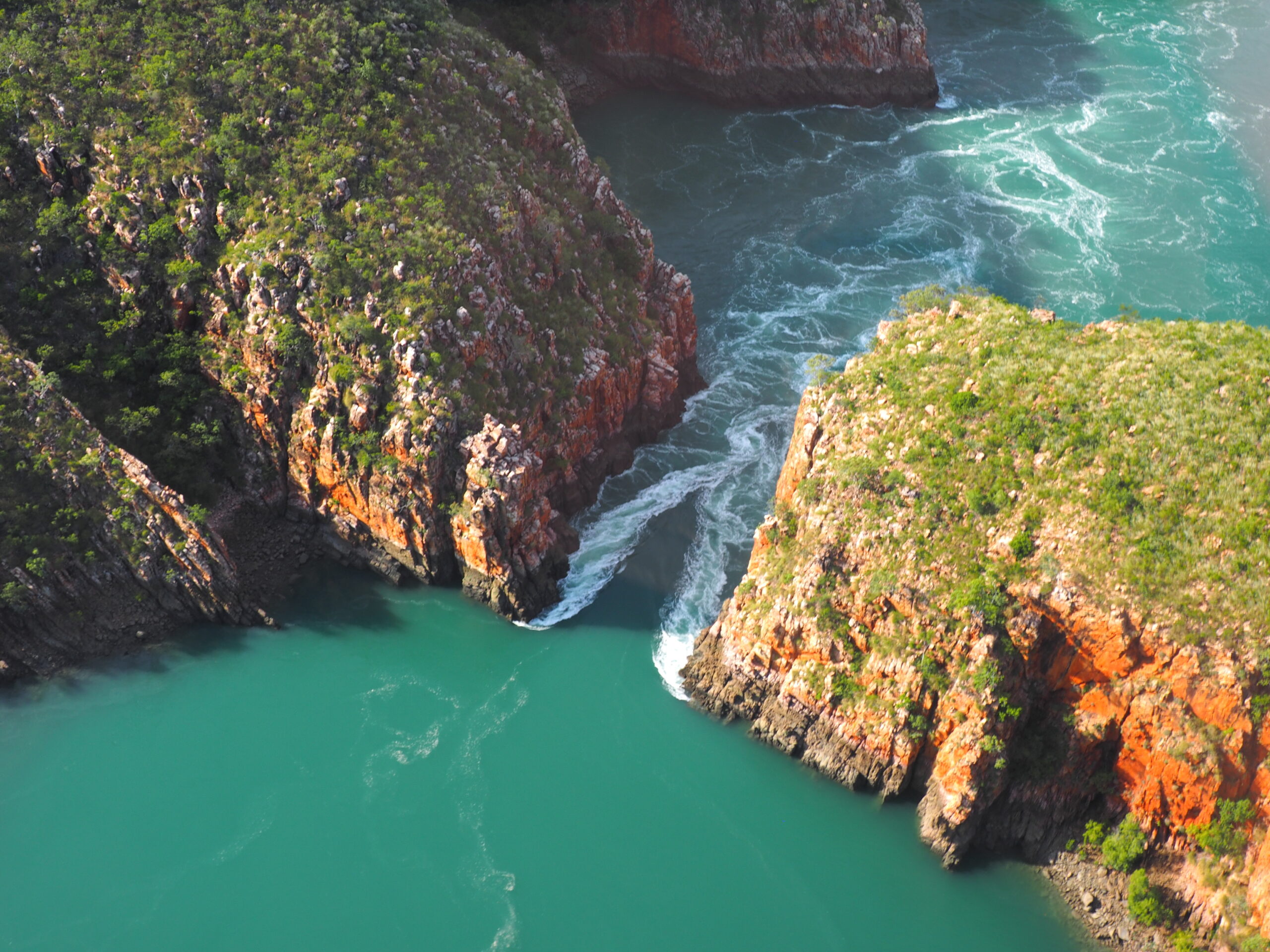 The Horizontal Falls are where the narrow mouths of two flooded valleys prevent the area’s fast-moving 11-metre tides from rising and falling freely, so that the water piles up behind the gaps and shoots through like a gigantic fire hose. From the air they are impressive enough but bouncing over the whirlpools in a tender soon after landing, and hearing the motor roar with the effort of holding us still as the tide fell through the seven-metre gap was something else entirely.

Surrounded by tall orange cliffs and clear turquoise sea, the Kimberley Quest stood out as a white beacon of civilisation: a 25-metre, nine-cabin haven, perfectly designed for accessing the many crevices of this ragged stretch of coast, each with its secret reward. 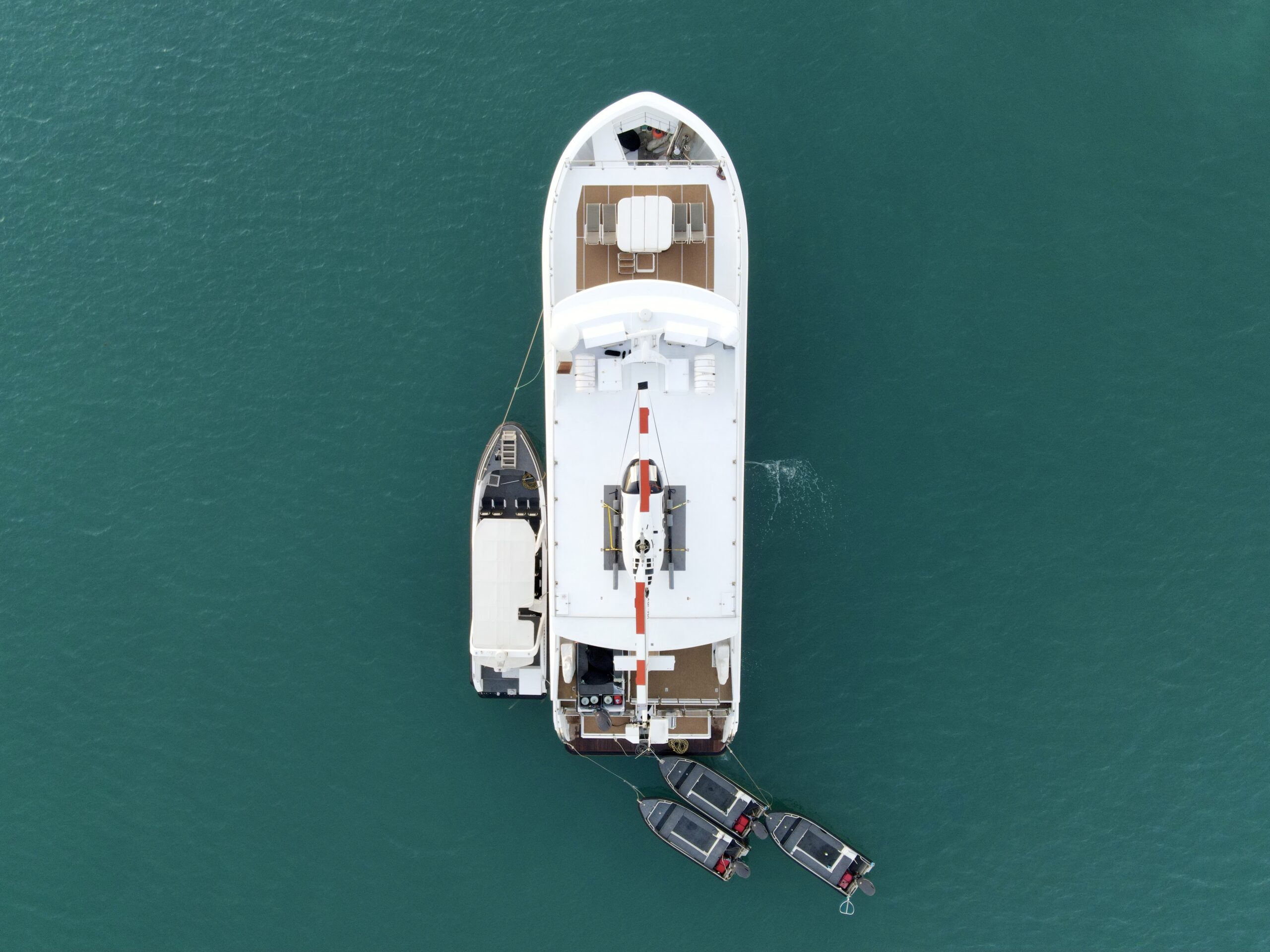 Given the run of the boat, we were comfortable, eminently well-fed, and both informed and entertained by the seven-person crew. They worked hard to make our experience memorable, even to the extent of Brent providing a photo op by swishing fish frames in the water, while looking over his shoulder and muttering, “It’s not the shark that gets you.”

The c-word was rarely mentioned, but we were well aware of being in croc country. That was part of the thrill of being in this remote area, and that night, after an excellent dinner that included fish we had caught in Cyclone Creek that afternoon, we lay comfortably on the top deck to enjoy another.

So far from any town, the stars were brilliantly bright – and also, being so much closer to the equator, they included many constellations invisible further south. It was such a dazzling display, with added shooting stars and lightning flashes, that I felt able to forgive their calling Canopus “Kiwi beer”.

Montgomery Reef was the star of our second day: a vast reef just below sea level that, when the huge tide falls rapidly, appears to rise up out of the sea, festooned with waterfalls along its edges. It was an astonishing sight, both from the helicopter that took off from Kimberley Quest’s roof, and from the tender, as we spotted turtles, rays, reef sharks and even a dugong making hasty exits from the reef as it ‘rose’. 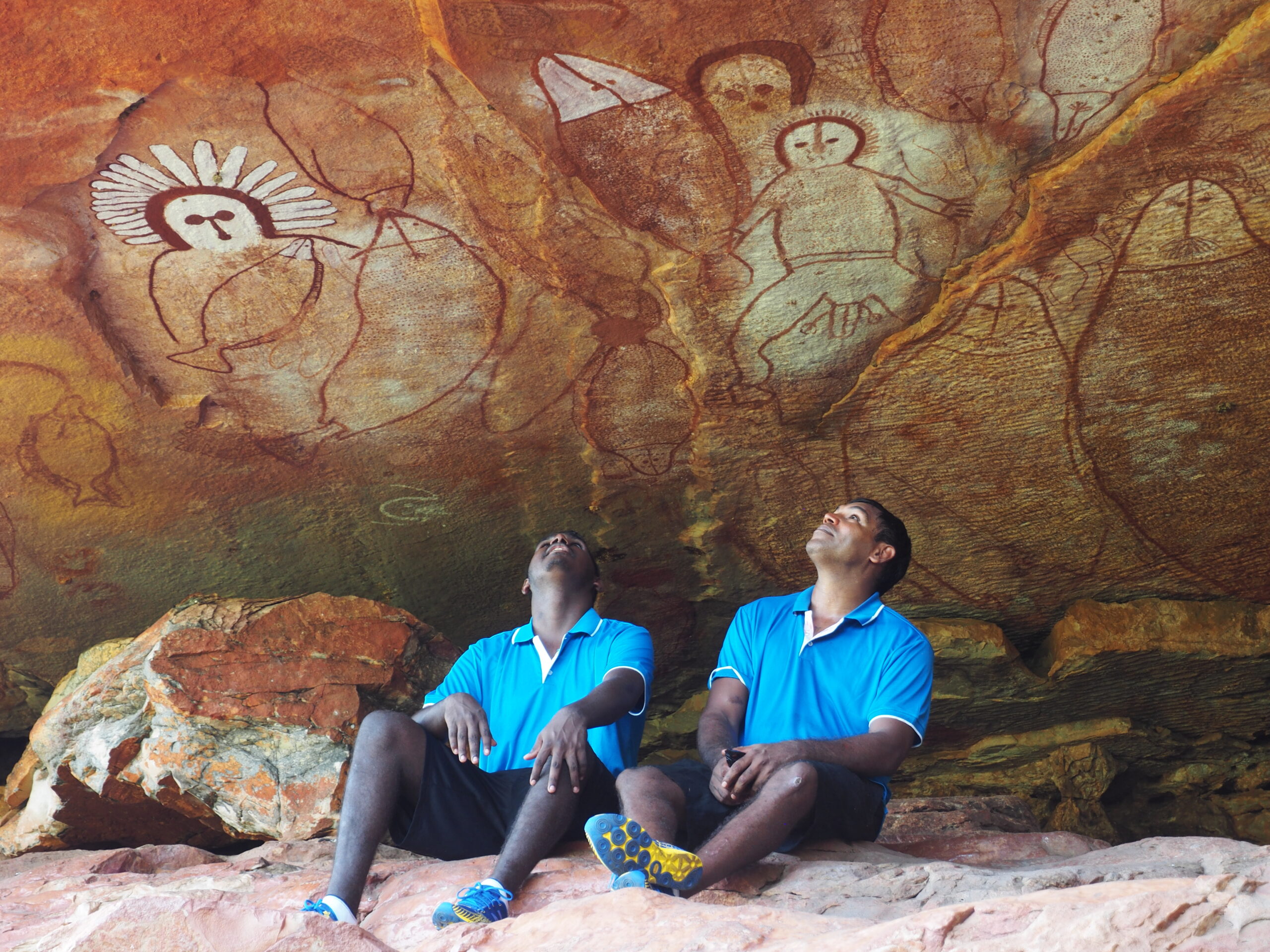 The helicopter also brought Callum and Kenny to visit us: local Aboriginal men who escorted us ashore on a walk through the bush, past swollen boab trees, to some ancient, and striking, paintings of their Wandjina people under a rocky overhang. Smearing our cheeks with orange ochre, they gave us an introduction to their rich, 40,000-year-old culture, telling us Dreamtime stories.

Our much less ancient culture had its delights too, we decided afterwards, as we lolled with our drinks in the spa pool on the deck as Kimberley Quest cruised to our next point of interest. We felt very spoiled as we looked forward to more drinks, dinner and stargazing. 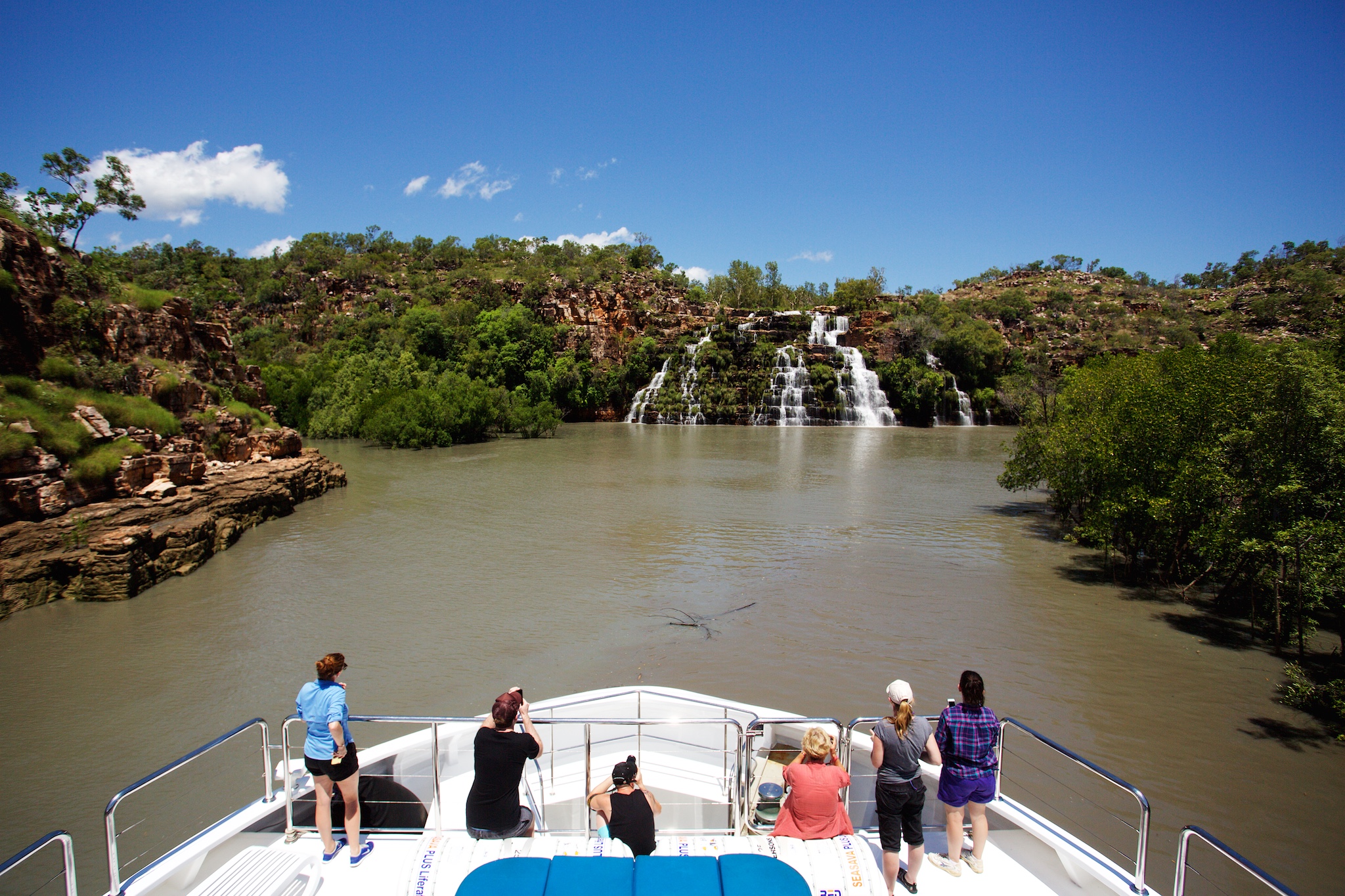 The next day brought more fishing – catching cod, blue-nose salmon and a 59cm barramundi – before cruising along the Prince Regent River to Kings Cascade. This is a lovely waterfall where we went ashore to climb up to a beautiful, and thankfully croc-free, swimming hole at the top, surrounded by bird-busy bush and more of those signature orange sandstone rocks, 1800 million years old. It was glorious – as was Mt Trafalgar, a spectacular flat-topped mesa, which we flew over in the helicopter later.

During the afternoon we visited more sites of ancient and striking Aboriginal rock art, some of it discovered by chance by staff members: the Kimberley is full of it. Walking through the bush was sweaty work in the gaspingly hot and humid conditions that March brings to the Kimberley and, though it meant that the vibrancy of the colours was dimmed, we were relieved when it began to rain. And rain, and rain. 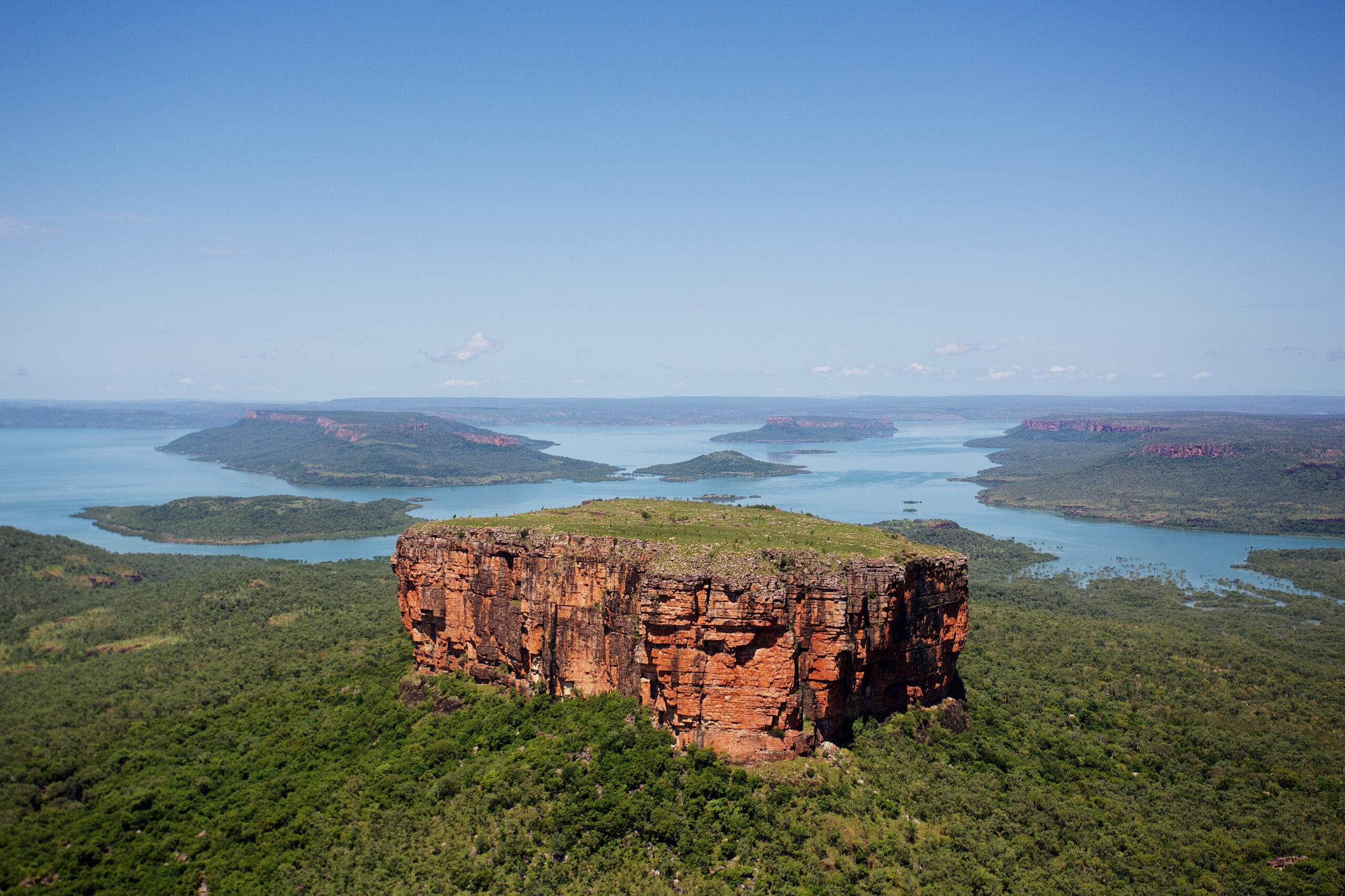 Then the lightning started – and continued, even after the rain had stopped, for an incredible four solid hours of bolts, forks and flashes that had us all entranced as we sat out on the deck and gawped. It was absolutely phenomenal.

Of course, that sort of display is outside of anyone’s control, but what is certain is that the Kimberley – remote, untouched, raw and stunningly beautiful – will always deliver a memorable experience. With 700 kilometres of rocky coastline plus estuaries, sounds and 2,700 islands, all lapped by a warm turquoise ocean full of fish, whales and other sea creatures, there are always going to be surprises and unexpected rewards for going so far, and being adventurous. 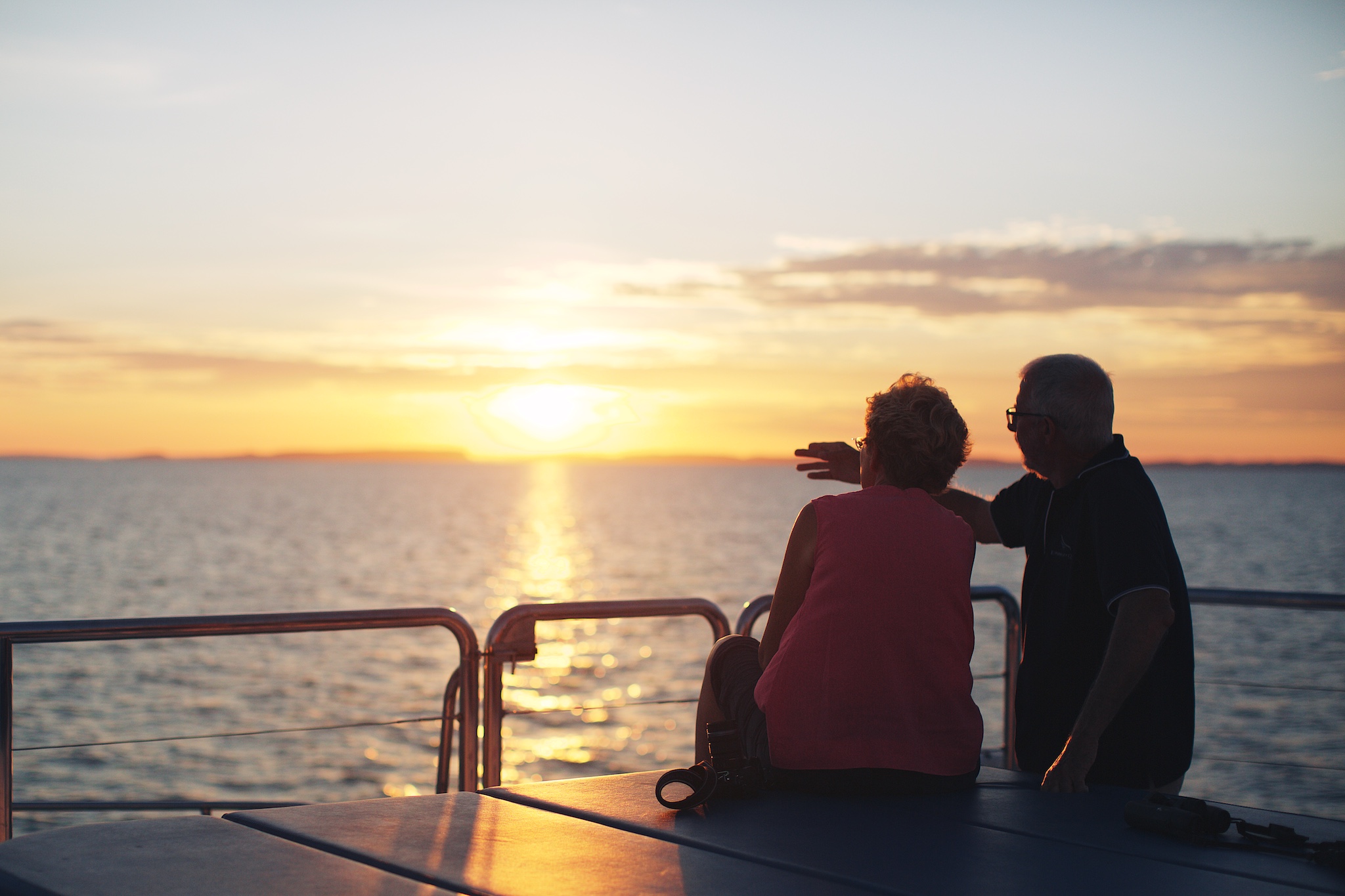 A Kimberley Quest cruise is unmatchable, and well worth the loss of a friend or two.

Getting there: Air New Zealand flies direct from Auckland to Perth, and Qantas from there to Broome. See: airnewzealand.co.nz; qantas.com

Kimberley Quest cruises start with a four-day Taster, and include eight, ten and 14-day itineraries along the Kimberley coast, culminating in the 21-day Beyond Adventure cruise. Prices begin at AU$3,990 (NZ$4,269) per person for a double cabin on the Taster cruise, with dates available for October departures. Week-long fishing expeditions are also scheduled. Helicopter flights are extra. See: kimberleyquest.com.au

Staying Safe: Check safetravel.govt.nz prior to travelling to stay updated on the latest travel advisories.

Carbon footprint: Flying generates carbon emissions. A return trip for one passenger in economy class, flying from Auckland to Perth, would generate 786kg of CO2. To offset your carbon emissions, head to airnewzealand.co.nz/sustainability-customer-carbon-offset.

The author travelled courtesy of Kimberley Quest, Tourism WA and Air New Zealand. This story was produced as a part of an editorial partnership with Western Australia.