This expedition departs from Darwin and is set to capture the Kimberley waterfall season. This is one of the most extensive itineraries on offer in the region!

Board Kimberley Quest II at 3pm for a 4pm departure. Join Kimberley Quest II at Darwin Fisherman's Wharf located at the end of Francis Bay Drive where you will enjoy canapes and a relaxing drink on the bow with the captain and friendly crew as the sun sets. Settle into your cabin before a sumptuous dinner, as your journey commences leaving Darwin Harbour crossing the Timor Sea. An expedition that is truly beyond adventure has begun!

The journey continues, crossing the Bonaparte Gulf to approach the coast of the Kimberley - one of the world's last great remaining wilderness areas. Anchor tonight at Reveley Island, the entrance to the Berkeley River, surrounded by a blanket of stars under the Milky Way!

Today commences with a leisurely cruise up the Berkeley River, taking in the numerous falls and ancient sandstone escarpments. The Berkeley River offers stunning ochre-tinted sandstone scenery, amphitheatre waterfalls and beautiful freshwater pools, perfect for a refreshing dip. You will have your first opportunity to catch a Barramundi today or alternatively you may go crocodile-spotting or bird watching. A walk up the back of the Berkeley River will lead us to a beautiful freshwater pool, where we enjoy a leisurely dip.

Today we visit two sites associated with the German aviators Bertram & Klaussman. In 1932, the pair were blown off course in their seaplane Atlantis and endured starvation in the wilderness, before being found and rescued by Gwini Aborigines after 40 days.

At high tide, we cross the sandbars of the King George River for a breathtaking cruise along this beautiful waterway. Incredible scenery unfolds as we approach the King George Falls, through vertically-sided sandstone canyons, ending at the highest waterfall in Western Australia. The Kimberley Quest II cruises to the base of the twin falls for a refreshing 'Kimberley shower'. Overnight we anchor just metres away from the falls and are lulled to sleep by water cascading over the cliff face! This quest will capture Kimberley waterfalls during their peak performance.

This morning for those intrepid adventurers it is well worth a climb to the top of the falls for a breathtaking vista of the river below – a truly humbling experience, as you appreciate the immensity of this ancient untamed landscape. Enjoy a well-deserved swim in one of the cool upper pools, followed by an excursion to the East Arm Falls.

Visit Koolama Bay, where the motor vessel Koolama was beached in February 1942, following an attack by the Japanese. The passengers were taken ashore on orders from the ship's master, while 93 people had to walk overland on an epic cross-country trek. The Koolama was unfortunately sunk off the Wyndham jetty during another air raid. Plenty of history surrounds the Kimberley and our crew will be more than happy to share the stories with you. After visiting the survivors' camp at Pangali Cove, enjoy a freshwater dip beneath a nearby waterfall.

Today we view more unbelievable Kimberley waterfalls, namely the Barramundi and Glycosmis falls. Try your luck at landing the elusive Barramundi or revel in the remoteness of this magical region. Later on, we cruise around Cape Londonderry, the most northerly point of Western Australia and enter the Indian ocean.

Today we encounter one of the longest rivers in the Kimberley (432km), the Drysdale. Spend the day exploring the spectacular palmstudded landscape and the rock terraced rapids of the Drysdale area. Join our guides on a scenic excursion to witness crocodiles, flying foxes and many species of bird life which thrive in these delta islands. Then enjoy a swim in secluded rock pools. During late afternoon, walk on a deserted beach or try to catch a Barramundi, with many great 'snags' to fish around.

Today we explore various coves within Vansittart Bay, visiting sites rich in the fascinating Gwion Gwion (Bradshaw) art, named after Joseph Bradshaw, who in 1891 became the first European to record these amazing paintings. Some Bradshaw art, which is unique to the Kimberley, has been dated at over 17,000 years old. There is also the opportunity to visit a historic Makassan (Indonesian camp) and the wartime crash site of a DC3 aircraft, located on the eastern side of Vansittart Bay. As we continue our journey, we pass the rugged basalt cliffs and emerald rainforests of the Bougainville Peninsula, before crossing Admiralty Gulf.

We are now entering the incredible assortment of islands that form the Bonaparte Archipelago. Cruise up the Mitchell River estuary – a mangrove paradise ideal for mud crabbing! Later we drop a lure in and perfect your fishing skills in these rich waters or go crocodilespotting. Later in the afternoon enjoy a swim in the cool tranquil waters of Surveyors Creek.

Step back to a land before time, viewing some of the finest examples of Kimberley rock art. Every period of Kimberley rock art is on display in and around this area. Let your imagination flow as we hike through the remote terrain, sit under rocky coves and marvel in the magnitude.

This morning we cruise south through Scotts Strait to visit amazing sea-caves and the spectacular sandstone coastline of York Sound. As we continue our journey we visit Careening Bay, site of an ancient carved boab tree first visited in 1820 by Phillip Parker King while on a hydrographic survey of the Australian coastline.

Early this morning, we cruise through St George Basin, a stunning inland sea. Leaving the vista of the might Mt Trafalgar and Mt Waterloo, we cruise up the Prince Regent River, marveling at the fault line waterway that cuts through sandstone cliffs and gorges. Arriving at the spring-fed King Cascade, admire the rush of water cascading in breath-taking tiers, surrounded by lush ferns and a myriad of wildlife. Climb above the falls for an unforgettable swim in a massive crystal-clear pool. Be rewarded with a breath-taking view over the magnificent Prince Regent River in the distance – wilderness adventuring at its best! Late in the afternoon join our guides for an excursion to Cathedral Falls, while spotting crocodiles and flying foxes. Alternatively, fish the Prince Regent River which is renowned for big Barra and Threadfin Salmon.

At nearby Camden Harbour, we visit forlorn settlers' graves on Sheep Island and soak up the history of the early European settlement. Take one of the tenders for a spot of exploration, have a go at fishing or collect rock oysters. Alternatively relax on the sun-deck to take in the beautiful scenery. We then cruise between Augustus Island and the mainland, passing the remote pearling settlement of Kuri Bay. Late afternoon we will enter Deception Bay for a refreshing swim among paperbark trees.

This morning we cruise to Steep Island and anchor below the stunning cliffs of Raft Point, as we prepare to walk to the caves perched on the hill. Here is some of the finest well-preserved Wandjina art in the Kimberley. From the top we have an amazing view of the Kimberley coast. We then explore the Sale River and take an excursion upstream for a dip in the spring-fed rainforest pools, and on the journey home, view ancient rock art from the shaded fast boat, Quest Express. As the sun begins to set, we fish the inlets of Doubtful Bay for the elusive Barramundi and Threadfin Salmon.

Take a tender excursion to Red Cone Creek for a refreshing swim at Ruby Falls, or join our guides to try your luck at mud crabbing. We then cruise to the amazing Montgomery Reef, which covers more than 300km², making it Australia's largest inshore reef. Watch as the tide falls right before your eyes, creating a waterfall effect as the reef rises out of the water. Then take a ride in the tenders to observe many marine species, including turtles and sea birds. Late afternoon try your luck at Barramundi fishing in Collier Bay or alternatively, relax on board and take in the beautiful scenery.

Cruise to Talbot Bay, home to one of the icons of the Kimberley coast, the spectacular Horizontal Falls. Take a tender and head in for an up-close and exhilarating ride through this natural phenomenon. Join a scenic excursion up the back of Cyclone Creek to marvel at the amazing rock formations. In and around Dugong Bay, we take a scenic tender excursion and cool off with a refreshing swim in one of the freshwater pools. In the afternoon we cross the vast King Sound, after cruising through the thousands of islands of the Buccaneer Archipelago passing Cape Leveque at sunset, as we journey through the night towards Broome.

Arrive into Broome early morning. Enjoy your last breakfast on board before saying goodbye to the crew of the Kimberley Quest II. Disembarkation on Cable Beach is at approximately 8.00am, where a courtesy vehicle will transfer you to your accommodation or airport.

This is only a suggested itinerary. The remote Kimberley region experiences large tidal movements which can affect our itinerary. We may need to vary this from time to time, however, no matter the tides, we always visit the spectacular icons of this region. There will be plenty of land and sightseeing excursions to many untouched places, and opportunities to catch fresh fish for the table. Please note scenic helicopter flights are available on request.

Don't have the time?

Looking to cruise for a little shorter? Why not explore our 14 Day Ultimate Kimberley Cruise for some many of the same highlights? 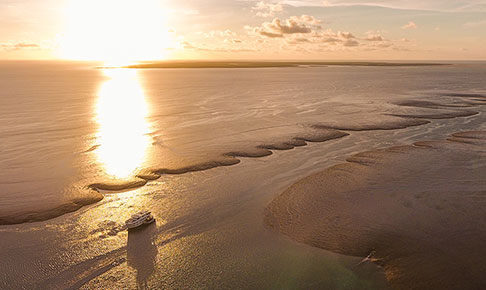 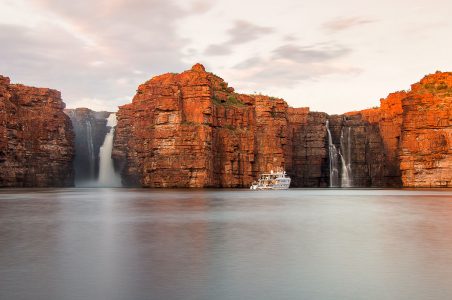 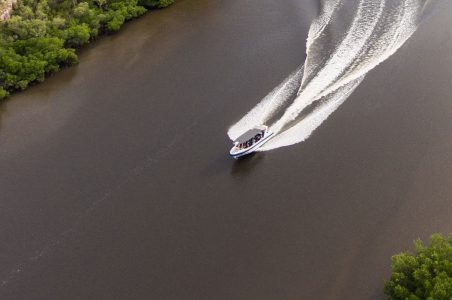 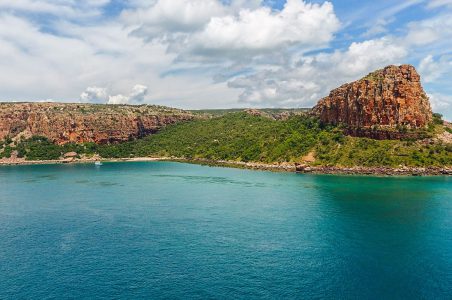 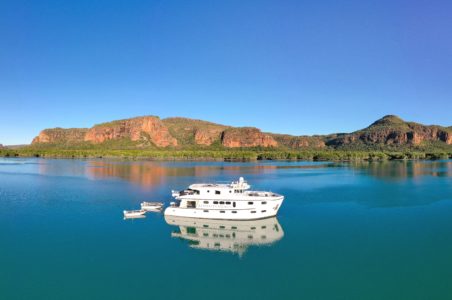 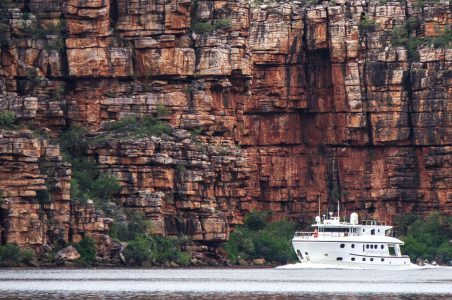 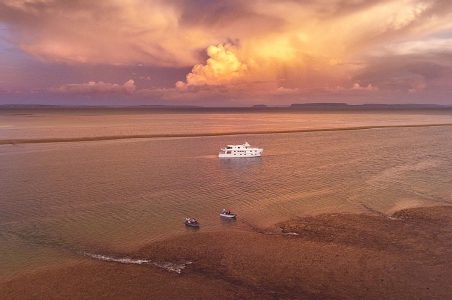 Taste of the Kimberley 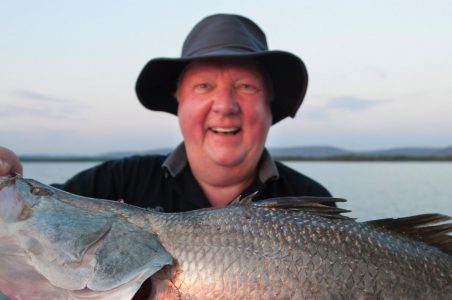